The Transport and Separations group, led by Assoc. Prof. Nathaniel D. Robinson, focuses on ionic and electronic transport in fluids and solid-state materials. One particular goal of this research is to create and understand new devices in areas such as micro- and nano-fluidics and solid-state lighting.

We focus on fabrication processes and devices for use directly in chemistry, biology, and medicine, typically using soft (polymeric) materials.  The interface between chemistry or bioligy and electronics is one of our specialties, and most of our devices a fully-functional, rather than simply being prototypes.  We collaborate with groups in biology and medicine to make microbioreactors and artificial tissue like skin. 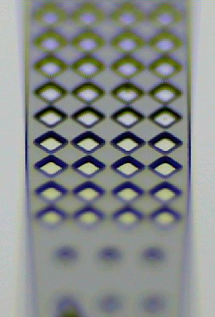 Electrophoretic systems are developed for a variety of applications including the reduction of animal testing for toxicity and pharmaceutical evaluations and general medical diagnostics.

One of our recent advancements takes advantage of novel materials such as conjugated polymers and metal oxides in an electroosmotic pump. The new device eliminates the by-products that are normally produced at the electrodes of electrophoretic pumps and often disturb or destroy the chemical or biological sample being studied. 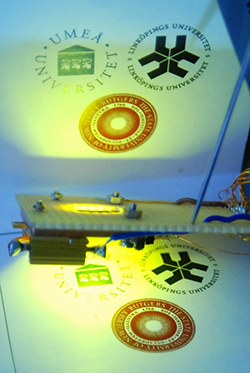 Light-emitting electrochemical cells (LECs) are similar in structure to light-emittine diodes (LEDs), but contain mobile ions and holes/electrons. The mixed ionic and electronic transport makes LEC operation difficult to understand, as demonstrated by the significant questions that remain unanswered over a decade after they were first demonstrated in the lab.

The motivation for studying LECs comes from their robustness. Unlike LEDs, they do not depend on precisely dimensioned layers or a low-work-function electrode, making them easier to produce with inexpensive techniques like printing. As with LEDs, LECs are much more energy-efficient than incandescent lighting.

Our current work is financed as part of the Designed Nanoparticles by Pulsed Plasma and Large-Area Light-Emission on the Roll projects.